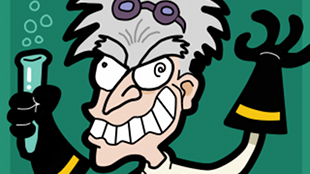 WIKIMEDIA, J.J.Early September—school is starting back up, students are joining new labs, and scientists are using the Twitter hashtag #labhazing to imagine the hypothetical pranks they might play on unsuspecting newbies.

Soon after, others were joining in with suggestions that ranged from mostly benign to downright terrifying. Rennie, who summarized the exchange on his PLOS blog The Gleaming Retort, noted that labs aren’t exactly hazing hotbeds but that surely scientists play the occasional prank. “If nothing else, during the long hours that scientists and technicians often spend waiting in their labs or doing mindless tasks, their imaginations have plenty of time to conjure up fantasies about pranks they could pull...

Here are some of our favorite tweets from the conversation:

Jamie Lynn Wood @JamieLynnWood
What do you mean a #Drosophila flew out of the vial?! Search the lab until you find it!! #labhazing

Jokes aside, some participants alluded to the dangers of hazing.

Bill Hooker @sennoma
@docfreeride The very concept of "lab hazing" makes me boiling angry. If I ever see that […] happening the explosion will be EPIC.

Chemist-turned-philosopher Janet Stemwedel (@docfreeride) pointed out that perhaps deliberate initiation ceremonies are unnecessary in the lab, considering the inherent difficulties of learning how to be a scientist. “Seriously. As if setting up an experiment from published materials & methods weren't #labhazing enough,” she tweeted.

Today (September 3), a new Twitter hashtag has emerged: scientists are now tweeting their most horrifying mistakes under the hashtag #labsafety.