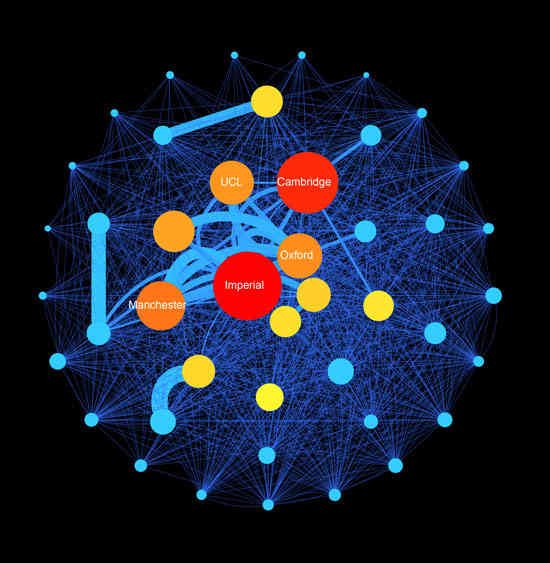 A network of collaborations among universities and industrial entities funded by the United Kingdom’s Engineering and Physical Sciences Research Council between 1985 and 2013.COURTESY OF ATHEN MACertain networks of institutional collaborations are more successful in securing grants than others, according to a new study of 43,000 U.K. government-funded research projects. The analysis was published in PNAS last week (October 26). The “rich club,” as Phys.org called it, attracted more resources, but also produced “research with notable breadth and depth.” In other words, government funding is unequally distributed among research institutions, but that’s not necessarily a bad thing “as far as the quality and variety of research are concerned,” Phys.org reported.

“This [successful network] is likely to have arisen due to [the institutions’] ability to develop a broad range of expertise and extend partnerships with specialist entities,” the authors wrote in their paper. “In addition to that, these universities formed the very center of a rich core through their strong reliance.” Institutions that formed collaborations of the “rich club” seemed to benefit from increased funding.