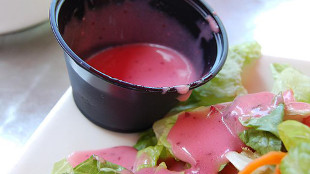 WIKIMEDIA, TRICIATwo of the 15 most common emulsifiers that bind the oily and watery components of processed foods can alter the gut microbiome and reduce the barrier layer of mucus between immune cells and bacteria, according to a mouse study published this week (February 25) in Nature. As a result, mice that consumed the emulsifiers were more prone to a range of symptoms that are hallmarks of inflammatory disease and metabolic syndrome, researchers reported.

Researchers at Georgia State University and Cornell provided inflammation-prone mice and wild-type controls with water containing the emulsifiers carboxymethylcellulose or polysorbate 80 for 12 weeks. At emulsifier levels ranging from 0.1 percent to 1 percent—the maximum recommended by the US Food and Drug Administration—the inflammation-prone mice saw doubled risk of developing colitis; both sets of mice ate more, gained 7 percent of their body weight, developed resistance to insulin, and had higher blood sugar...

In the emulsifier-fed mice, the scientists found that the average width of the protective layer of mucus in the gut that keeps the microbiome from coming in contact with immune cells and triggering inflammatory responses was reduced by half. At the same time, the relative populations of bacterial species in the microbiome changed. Bacteria that can eat through mucus became more populous, while there were fewer representatives of species that produce anti-inflammatory chemicals. The inflammation and metabolic symptoms were not present in germ-free mice fed the emulsifiers, suggesting a critical role for the bacteria in causing the inflammatory symptoms.

“Our findings reinforce the concept suggested by earlier work that low-grade inflammation resulting from an altered microbiota can be an underlying cause of excess eating,” study coauthor Andrew Gewirtz of Georgia State said in a statement.

Emulsifiers are common in ice cream, salad dressing, and many other packaged foods, but it is not yet known how they may affect the human gut. “When it comes to people making their own decisions, between our studies and others out there, it’s better to eat less processed food,” Gerwitz told Nature News.