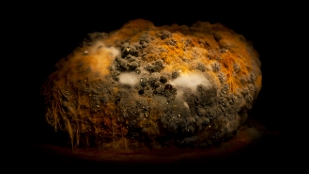 Those “science experiments” of thick fungus growing on coffee left for weeks on the desk, or sandwiches kept too long in the fridge are Estonian artist Heikki Leis's moldy muses. Afterlife is an exhibit of photographs taken of food Leis carefully let rot in his studio. It was on display last year at the AHHAA Science Centre in Estonia.

Wired Science blog invited mycologist Kathie Hodge of Cornell University to comment on the photos and try to spot the fungal species. “Most of the blue-grey molds are species of penicillium,” she told Wired, referring to photos that featured vegetables with splotches of the fuzzy blue species. “It seems that the artist may have a penicillium issue in his studio.” She picked out another familiar character in the line-up, Rhizopus stolonifer, forming a fluffy beard on the bottom of a potato....

Different fungi release enzymes that digest different parts of the plant. “Some molds are very good at breaking down cellulose. Others are very good at breaking down protein,” she told Wired. As they digest and withdraw the nutrients they need, the fungi often release liquid droplets as a byproduct that look as tantalizing as beads of condensation on cold drink. But, Hodge warns about one beautiful beet mold with red jeweled beads, “There's probably some mycotoxins in there, so I wouldn't put my tongue on that.”