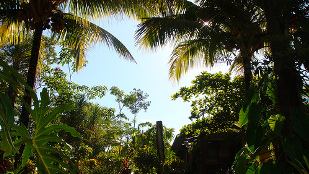 FLICKR, PHILIP LARSONWhile pathogenic fungi and insect herbivores can wreak havoc on individual plants, together they seem to enhance rainforest biodiversity by damaging those species that occur at high density, making room for other plants to grow up in their place, according to a study published in Nature last week (January 22). Specifically, a team led by investigators at the University of Oxford show that these fungi and insects can affect changes in plant diversity and species composition.

“The more common a plant is, the more aggressively it is attacked,” Keith Clay, a plant ecologist at Indiana University in Bloomington, who was not involved in the work, told Nature.

The researchers measured diversity of seeds and seedlings from a rainforest in Belize, then tested whether excluding pathogenic fungi and insect herbivores from the same region—by spraying insecticide and fungicide on experimental plots—would decrease diversity. And it did.

In a Nature commentary, the Smithsonian Tropical Research Institute’s Helene Muller-Landau noted that “this is the first study to explicitly link a particular group of natural enemies to negative density dependence and the maintenance of species diversity in tropical forest plants.”