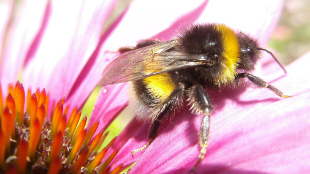 The buff-tailed bumblebee, Bombus terrestrisWIKIMEDIA, LORDTORANBumblebees, which visit numerous flowers daily to sip nectar as they spread pollen, may experience glitches in their long-term memories of which blooms yield the sweetest treats, according to researchers in the U.K. In a study published in Current Biology last week (February 26), Lars Chittka and Kathryn Hunt of Queen Mary University of London showed that buff-tailed bumblebees, Bombus terrestris, can sometimes merge memories of flower patterns such that they visit blossoms that combine colors and patterns of flowers that had previously been nectar-filled. “We suspect that memory merging may be as common in animal minds as in human minds, but no one has explored this in animals before, so to find it in bumblebees was exciting,” Chittka told Science News.

Chittka and Hunt trained bees to feed on a nectar-like substance they found within artificial flowers that were colored...

“Bees can memorize more than one flower type, though there are costs,” Chittka told New Scientist. “Bees make more mistakes when they juggle multiple memories than if they just focus on one flower type.”

“This research shows that memory errors, similar to some to which we are also victim, occur in a very distantly related species, an insect, and therefore suggests that all nervous systems share some common memory mechanisms,” Stefano Ghirlanda, a biologist at Brooklyn College in New York who was not involved with the research, told New Scientist.