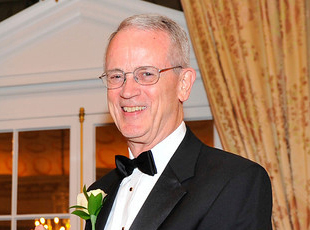 “Chuck Vest’s irrepressible good humor and easy laughter mixed effortlessly with his earnest, persistent pursuit of the right path in all things,” Susan Hockfield, who followed Vest as MIT president, said in a statement.

Born in Morgantown, West Virginia, in 1941, Vest got a bachelor’s degree from West Virginia University in mechanical engineering, and earned masters and PhD degrees in mechanical engineering from the University of Michigan. In 1968 he joined the University of Michigan’s faculty, where he researched applications of laser optics and holography. He became an associate dean of engineering in 1981, and rose rapidly through the administrative ranks before leaving a position as vice president of...

During his tenure at MIT—the third longest of any of the institution’s presidents—Vest expanded the endowment from $1.4 to $5.1 billion. Under his leadership, MIT research flourished—especially in the fields of neuroscience, nanotechnology, genomics, and biological engineering. In 1998, Vest responded to charges of discrimination put forth by senior women faculty in MIT’s School of Science with an inquiry that generated a public report and real changes in the balance of women and minorities in leadership positions and in the student population. “I have always believed that contemporary gender discrimination within universities is part reality and part perception,” Vest wrote in the introduction to the report. “True, but now I understand that reality is by far the greater part of the balance.”

Another part of Vest’s legacy was the 2002 launch of OpenCourseWare, which now shares the majority of MIT’s courses online for free. Off campus, he was part of the President’s Council of Advisors on Science and Technology and led the Committee on the Redesign of the International Space Station for President Bill Clinton. After leaving MIT in 2004, Vest served on President George W. Bush’s bipartisan Commission on the Intelligence Capabilities of the United States Regarding Weapons of Mass Destruction and, in 2007, became the president of the National Academy of Engineering—a post he held until early this year.

“Chuck Vest was both a product and a champion of this nation’s powerful scientific and engineering community,” Bill Clinton told The New York Times. “He served with distinction as an ambassador and spokesman for science in Washington, advocating tirelessly for the essential role of research in our economic growth and national security.”

Vest is survived by his wife, two children, and four grandchildren.