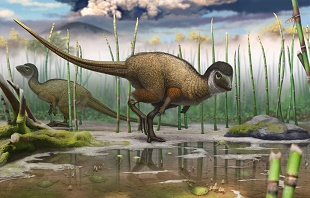 SCIENCE, ANDREY ATUCHINFeather-clad dinosaurs may have been the norm rather than a rarity restricted to certain groups, according to a study published last week (July 25) in Science. The prevailing evidence to date had suggested that only theropods—two-legged carnivores such as Velociraptor and Yutyrannus—had plumage. But this latest analysis of a 160-million-year-old ornithischian fossil suggests feathers were far more common, and arose earlier than previously thought.

A group of researchers led by Pascal Godefroit of the Royal Belgian Institute of Natural Sciences analyzed Kulindadromeus zabaikalicus, a Jurassic ornithischian dinosaur from Siberia that had both feathers and scales. “For the first time we have a feathered dinosaur that is far from the lineage leading to birds,” Godefroit told Science News. “It means that all dinosaurs were potentially covered by feathers.”

The approximately 5-foot-long bipedal herbivore had a small head, pointed tail, and likely foraged for food in...

The discovery could change paleontologists’ views of feathered dinosaurs. “The popular scaly model of plant-eating dinosaurs may, in years to come, be completely replaced by a feathered-scaly model,” Darla Zelenitsky of the University of Calgary who was not involved in the study told The Verge.

But whether the unusual structures identified on Kulindadromeus are truly feathers is still uncertain. “Most feathers have a branching structure,” Paul Barrett of the Natural History Museum in London told BBC News. “Instead these look like little streamers coming from a central plate. No bird has that structure in any part of its plumage.”