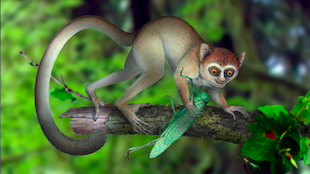 An artistic rendering of Archicebus achillesXIIJUN NI, INSTITUTE OF VERTEBRATE PALEONTOLOGY AND PALEOANTHROPOLOGY, CHINESE ACADEMY OF SCIENCESA 55 million-year-old primate fossil called Archicebus achilles, unearthed in China in 2002, is an early ancestor of the modern tarsier, according to an analysis published in Nature this week (June 4). The oldest complete primate fossil yet found, it gives clues into what early primates looked like.

Modern tarsiers are tree-dwelling primates that live on Southeast Asian islands. The tarsier lineage split off from the anthropoids, the lineage that gave rise to monkeys, apes, and humans, just slightly before the time of the fossil specimen, the authors suggest.

Therefore the physical features of the fossil likely are representative of what the common ancestor of tarsiers and humans may have looked like, according to a Nature news article. The fossil primate’s tooth shapes indicate a diet of insects. Its small eye...

The fossil also bolsters the theory that primates evolved in Asia and only later migrated to Africa, according to ScienceNOW.

“You don’t get these kinds of complete fossils very often,” John Fleagle, a paleontologist at Stony Brook University who was not involved in the study, told ScienceNOW. “It documents an aspect of primate evolution that we didn’t have much documentation for.”