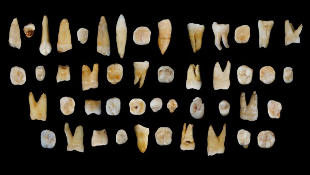 IMAGE, S. XINGDozens of human teeth recovered from a cave in China’s Hunan Province just might upend the thoroughly entrenched paleoanthropological hypothesis that humans migrated from Africa to East Asia about 50,000 years ago—if the dating of the fossils are confirmed. A team of researchers from China and elsewhere analyzed minerals and animal fossils found near the teeth and determined that the materials were 80,000 and 120,000 years old, respectively. The researchers published their findings this week (October 14) in Nature. If confirmed, these teeth would be the oldest Homo sapiens fossils yet found in Asia.

“This changes everything. It’s the best evidence we have for modern humans in East Asia this early,” University of Oxford archaeologist Michael Petraglia, who was not involved with the work, told Science.

Researchers have proposed earlier dispersals of humans out of Africa in the past, but the Chinese teeth, if their...

H. sapiens fossils don’t turn up in Europe until much later—the earliest known specimens are about 40,000 to 50,000 years old. In their paper, the authors suggested this lag may have been due to the colder climate of Europe at the time or the presence of competitive Neanderthals keeping our species at bay.