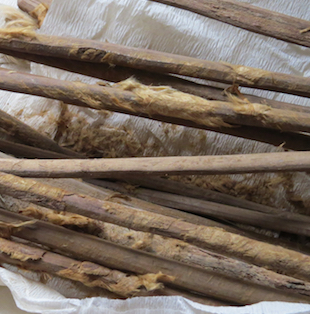 UNIVERSITY OF CAMBRIDGE, HUI-YUAN YEHTwo millennia ago, someone traveling the Silk Road had just pooped in a latrine. He had no toilet paper, but that was no problem. He used a “personal hygiene stick”—a handheld piece of bamboo or wood with strips of cloth on the end—to wipe his bottom. In his now-fossilized feces, researchers have found tell-tale parasites: they represent the first evidence that these organisms travelled the ancient route with their human hosts, according to a study published last week (July 22) in the Journal of Archaeological Science: Reports.

The fossilized feces contained four species of parasitic worms: the roundworm (Ascaris lumbricoides), the whipworm (Trichuris trichiura), the tapeworm (Taenia sp.), and the Chinese liver fluke (Clonorchis sinensis), the authors—led by scientists at the University of Cambridge, U.K.—said in a statement.

Instead, the traveler likely brought the eggs from a moister region where the fluke is endemic. The closest locale would have been Dunhuang, about 930 miles away, RedOrbit reported. But the most probable origin would have been Guandong Province, where the parasites are most abundant—about 1,200 miles away. That’s about the distance from Los Angeles to Dallas.

“When I first saw the Chinese liver fluke egg down the microscope I knew that we had made a momentous discovery,” study coauthor Hui-Yuan Yeh of Cambridge said in a statement. “Our study is the first to use archaeological evidence from a site on the Silk Road to demonstrate that travellers were taking infectious diseases with them over these huge distances.”