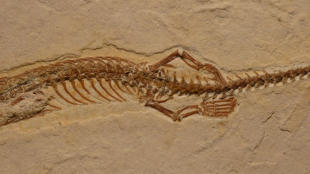 Is Tetrapodophis amplectus the missing link between lizards and snakes?IMAGE - DAVE MARTILL, UNIVERSITY OF PORTSMOUTHJust as the fossil Archaeopteryx is widely considered to be an evolutionary link between dinosaurs and birds, scientists now have the missing link between lizards and snakes, according to researchers who discovered a remarkable fossil in a German museum. The fossilized new species, Tetrapodophis amplectus, has four prehensile limbs but other characteristics that are distinctly snake-like, such as an elaborately elongated body and large ventral scales.

“From a developmental perspective, this could be one of the most important fossils ever found,” evolutionary biologist Martin Cohn of the University of Florida, Gainesville, told Nature. “The combination of a snake-like body with complete forelimbs and hindlimbs is like a snake version of Archaeopteryx,” Cohn, who was not involved with the research, added.

The fossilized Tetrapodophis, whose name loosely translates as four-legged...

Martill and his coauthors described the unique fossil in a Science paper published last week (July 24). They suggested that Tetrapodophis likely used its legs for grasping prey or mates rather than for locomotion, and that the new species probably originated from burrowing lizards. “Tetrapodophis doesn’t show any aquatic adaptations—no long, oar-like tail, no thick bones to act as ballast, no flippers,” study coauthor Nick Longrich of the University of Bath, U.K., told New Scientist. “But it does show some pretty classic burrowing features, like low spines on the vertebrae, and a short tail and a long trunk.”

Some researchers are not convinced that the fossil represents a transitional snake species. “I honestly do not think the fossil represents the remains of a snake,” Michael Caldwell, a palaeontologist at the University of Alberta in Edmonton, Canada, who was not involved with the research, told New Scientist.

“It completely lacks key features of the vertebral column that would make it a squamate [scaled reptile] and more specifically a snake.” While some of features of Tetrapodophis’s teeth are distinctly snake-like, Caldwell added, “if the rest of the animal is not a squamate, then teeth do not make you a snake.”