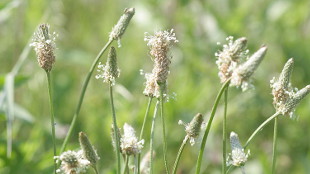 Plantago lanceolataWIKIMEDIA, DALGIALContinuous patches of natural habitat could help restrict outbreaks caused by plant pathogens by increasing disease resistance, according to a study published yesterday (June 12) in Science. Over a 12-year study on the Åland Islands in the Baltic Sea, a team led by Jussi Jousimo of the University of Helsinki in Finland surveyed more than 4,000 populations of the herb ribwort plantain (Plantago lanceolata) for the presence of a fungal pathogen, Podosphaera plantaginis, which causes powdery mildew, a widespread plant disease. The researchers found that isolated, fragmented ribwort populations were more frequently infected with powdery mildew than were well-connected ribwort populations.

“I would have predicted exactly the opposite result—that hosts in fragmented populations would be protected from this fungus,” Richard Ostfeld of the Cary Institute of Ecosystem Studies in Millbrook, New York, who was not part of the study, told Wired....

Jousimo’s team also experimentally tested the resistance of ribwort from different populations and found that plants originating from well-connected populations showed greater resistance against powdery mildew than did those from isolated patches of the plants. This could be because genetic diversity increases in high-density populations due to higher gene flow, the authors proposed. “The results are a powerful demonstration that while plants stand still, their genes don't. Landscape structure strongly impacts how pollen and seed travel, shaping the genetic diversity of local populations,” study coauthor Anna-Liisa Laine said in a statement.

While the study found a link between the spatial structure of a landscape and disease dynamics in natural populations, it may be too early to extrapolate the results. “Whether habitat fragmentation is likely to contribute to increased infectious disease in a wide range of systems is an open question,” Meghan Duffy of the University of Michigan, who was not involved in the study, told Wired.