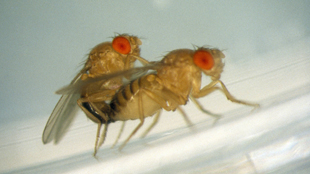 PLOS BIOLOGY, TRACEY CHAPMANLike humans, insects are at risk for contracting sexually transmitted infections (STIs). It has been shown previously that the immune and stress responsive gene Turandot M (TotM) is upregulated in the heads of female fruit flies (Drosophila melanogaster) in response to male courtship songs. Researchers from the University of Bath in the U.K. have now shown that increased TotM expression protected against infection of a fungus (Metarhizium robertsii), but only when transmitted sexually. Their work was published last week (October 30) in Proceedings of the Royal Society B.

The researchers topically inoculated male flies with M. robertsii and then exposed the males to control female flies or to females in which TotM had been knocked down. They showed that TotM knockdown females were more likely to die from sexually transmitted M. robertsii infections than control flies, but not from topical infection. The scientists also found that uninfected TotM knockdown females lived longer and were more fertile than controls, suggesting that, while TotM could confer protection against STIs, its expression could be costly for the fly.

“It is exciting to learn that females boost their immunity in response to male courtship,” said coauthor Nick Priest, a lecturer in biology and biochemistry at the University of Bath, in a statement. “In addition to opening up new avenues of research, this finding proves the benefits of sweet talk!”