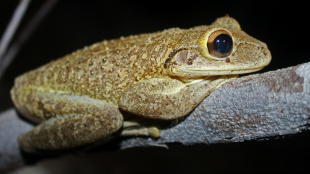 WIKIMEDIA, THOMAS BROWNA chytrid fungus that attacks frogs has ravaged amphibian populations around the globe. But a  study published in Nature today (July 10) showed that all might not be lost. Frogs who survived fungal exposure multiple times appeared to build up some immunity.

“Our findings offer hope that amphibians and other wild animals threatened by fungal pathogens—such as bats, bees and snakes—might be capable of acquiring resistance to fungi and so might be rescued by management approaches based on herd immunity,” Jason Rohr, a biologist at the University of South Florida and a coauthor of the study, said in a press release.

Rohr and his colleagues exposed frogs to dead or live Batrachochytrium dendrobatidis (Bd), but didn’t allow the infection to take hold. In both cases, those frogs that had been exposed multiple times fared better than frogs that had not met the fungus before. The results...

But the feasibility of such a vaccination campaign might be out of reach, and mortality rates among the immunized animals were still as high as 80 percent after five months. “It’s already a Bd world,” Karen Lips of the University of Maryland told National Geographic’s Not Exactly Rocket Science. “Essentially all amphibian species have already been exposed at some point. Many have been shown to self-clear infections, some get reinfected, some die, some don’t.” Still, she added, “any evidence that some amphibians are surviving with disease is good news. [And] anything that zoos and NGOs [non-governmental organizations] can do to promote or allow evolution of captive assurance populations would be good.”