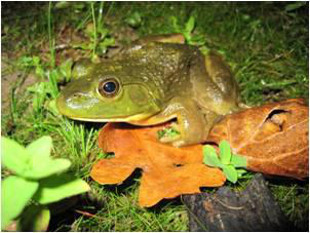 VIRGINIA TECHChytridiomycosis, a skin disease caused by the chytrid fungus Batrachochytrium dendrobatidis, currently threatens approximately 500 amphibian species worldwide. Researchers led by a team from Virginia Tech demonstrated that the composition of microbes on bullfrogs’ skin can indirectly affect the disease symptoms; the results were published today (October 7) in PLOS ONE.

Researchers at Virginia Tech and their colleagues collected 60 juvenile bullfrogs (Lithobates catesbieanus) from a pond in Virginia where the fungus had previously been detected. The team sampled the frogs’ naturally occurring skin microbes and randomly assigned them to one of six experimental groups: the frogs’ skin microbiomes were either reduced with antibiotics, augmented with a probiotic, or left alone. The bullfrogs were then either exposed to the fungus or used as a control over the 42-day experiment.

When the researchers analyzed the resulting microbial communities on the frogs, they discovered that...