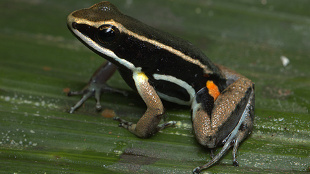 The hairy, pig-like peccaries serve as “ecosystem engineers” by stomping and rolling through the forest, creating holes in the ground that fill with rainwater. The “wallows” they leave behind provide an ideal dry season habitat for poison frogs like the brilliant-thighed poison frog (Allobates femoralis), which deposits its tadpoles in the small ponds to provide them with an aquatic habitat where they can mature into adults.

To study the impact of these depressions on the reproductive success of the frogs, researchers from the University of Vienna installed 30 plastic bowls to collect rainwater at regular intervals in a patch of rainforest in French Guiana and monitored frog populations in their test and control plots. The frog...

While the populations increased, the bowls also appeared to create more territorial competition among male frogs, leading to decreased male survival. Female survival was not affected. Overall, the effect of the bowls appeared to be positive, likely preventing many a tadpole from drying out. Since peccary populations are declining, and the swine hadn’t been observed in the study area for several years, human supplementation of the rainforest environment could help the frogs to avoid the same fate, the researchers proposed. “You have to protect a whole ecosystem and not try to focus on a single threatened species,” study coauthor Eva Ringler of the University of Vienna told Science News. 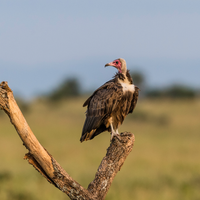