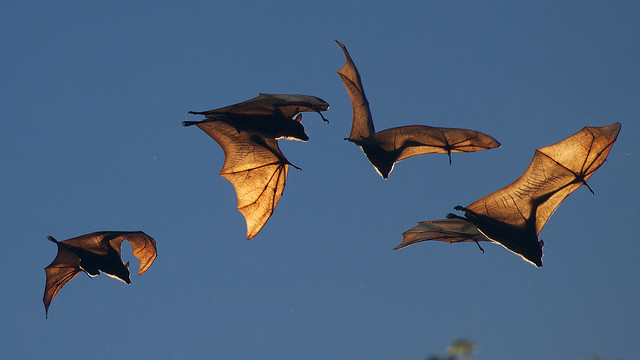 Bat caves are noisy places, and bats are sociable creatures. But a study published December 22 in Scientific Reports suggests that bats convey nuanced social information through the ruckus of chirps and calls, and that this communication is a learned, rather than innate, skill.

“When you enter a bat cave, you hear a lot of ‘gibberish,’ a cacophony of aggressive bat noise,” lead author Yossi Yovel of Tel Aviv University said in a press release. “Previous research presumed that most bat communication was based on screaming and shouting. We wanted to know how much information was actually conveyed.”

Yovel and colleagues recorded all of the sounds emitted by a group of 22 Egyptian fruit bats (Rousettus aegyptiacus) in an artificial cave for more than two months. A machine-learning algorithm then catalogued the vocalizations into a library of bat communication. Analyzing the data set, the researchers...

“We have shown that a big bulk of bat vocalizations that previously were thought to all mean the same thing, something like ‘get out of here!’ actually contain a lot of information,” Yovel told The Guardian.

Of the 15,000 vocalizations recorded, the team’s analysis revealed that a majority of the chatter pertained to squabbles over food, disputes for space on which to sleep or perch, or conflict related to mating.

The Tel Aviv team’s technique could lead to an understanding of the full breadth of bat communication, ecologist Kate Jones of University College, London, who was not involved with the study, told The Guardian. “It is like a Rosetta stone to getting into [the bats’] social behaviors.”