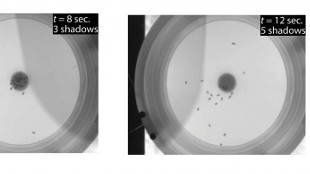 When prodded with a scary stimulus, fruit flies display some of the same fear-like reactions that humans do, according to a study published this week (May 14) in Current Biology.

Because emotion is difficult, if not impossible, to study directly in nonhuman animals, researchers at Caltech proposed breaking down emotional responses such as fear or anxiety into a set of behaviors known as “emotion primitives.” When a person is afraid of a spider, for example, he or she experiences a lasting negative feeling, an emotion primitive known as “persistence.” The more of the scary stimulus spiders there are, the more afraid the person will be, a primitive dubbed “scalability.” A third primitive, “context generalization,” occurs when the fear is strong enough to...

In its latest study, the same team looked for evidence of these fear-related emotion primitives in Drosophila. The researchers placed hungry flies in a chamber with food and used an automated fan blade to create a temporary shadow over the chamber. In response, the flies were distracted from eating and deserted the food source, even after the final shadow passed, demonstrating the emotion primitives of context generalization and persistence. As the shadow appeared with increasing frequency, the flies ran away more quickly, suggesting that their fear response is scalable, as well.

“When a fly responds to a visual threat, it isn’t just a robotic reflex; there is some sort of internal state that develops,” study coauthor David Anderson of Caltech told The New York Times.

While researchers are not able to conclude from these results that flies can be fearful in the same way that people can be, the presence of emotion primitives in fly behavior suggests that studies of the much simpler fly brain could provide insight into how the emotions of people work on a neurological level.