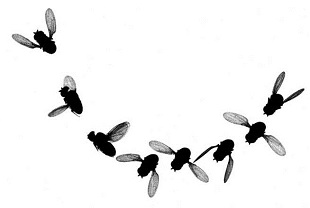 UNIVERSITY OF WASHINGTON, FLORIAN MUIJRES Fruit flies respond to threats with subtle, lightning-fast, evasive maneuvers that were caught on high-speed cameras by a group of researchers at the University of Washington. The finding, reported in Science last week (April 11), helps explain why it’s so difficult to swat a fly.

The researchers filmed flying fruit flies using three high-speed cameras that capture 7,500 frames per second. They showed the flies a dark shadow that increased in size, simulating an approaching predator. They recorded the flies using a swift rolling, banking movement and increasing their wing speed to zip away from the looming menace.

“These flies do a precise and fast calculation to avoid a specific threat and they are doing it using a brain that is as small as a grain of salt,” coauthor Michael Dickinson told BBC News. The tactic is like the maneuver is similar to the...

“What’s remarkable is the rapidity of the response, and the subtlety of the changes the flies make to their wingbeat when turning,” Graham Taylor of the University of Oxford, who was not involved in the work, told New Scientist. “The flies start turning away from approaching threats in half the time it takes you to start blinking at a camera flash, and finish throttling up in one-fiftieth of the time it takes you to complete that blink.”