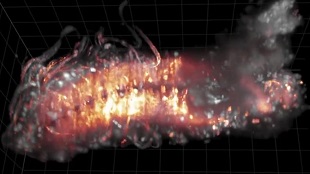 Fruit fly nervous system in actionYOUTUBE, SCINEWSA new video reveals flashes of neural activity as it moves up and down the body of a fruit-fly larva. The feat, published yesterday (August 11) in Nature Communications, adds Drosophila melanogaster to the list of species—including C. elegans and larval zebrafish—whose nervous systems have been imaged at single-cell or nearly single-cell resolution.

“The new thing we can do now is study how the neurons talk to each other across the entire brain,” Misha Ahrens, a neuroscientist at the Howard Hughes Medical Institute’s Janelia Research Campus in Ashburn, Virginia, who worked on the zebrafish study, told The Scientist in February 2014. “That’s a departure from previous studies, where people tended to look at many neurons, but a small fraction of the entire number.”

The new study builds on Ahrens and his colleagues’ method of genetically modifying neurons to fluoresce as...

“We wanted to see what was going on in the brain at those times,” coauthor William Lemon of Janelia Research Campus told Braindecoder. “Various areas of the brain are making decisions about whether the larva should go backward or forward or turn. It was important to record activity in the entire nervous system, all at once and in real time.”

Next up, the researchers hope to image mouse embryos, Nature reported.