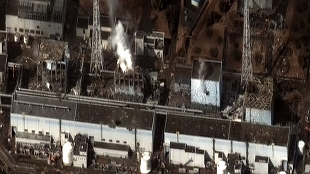 Tsunami damage at the Fukushima Daiichi power plant WIKIMEDIA, DIGITAL GLOBEMasao Yoshida, the man in charge of the Fukushima Daiichi nuclear power plant in Japan during the disaster wrought by the 2011 tsunami, died of esophageal cancer this week (July 9) at the age of 58. The illness was not believed to be a result of radiation exposure, reported The New York Times.

Yoshida had been chief manager at Fukushima Daiichi for 9 months when the site was engulfed by a 42-foot wave, leading to fuel meltdowns in three reactors and the release of radiation into the environment. He led the recovery efforts from a fortified bunker on the site, where he directed efforts to pump in seawater to cool the reactors.

The NYT reported that in video footage of the command room released last year, Yoshida offered to lead a “suicide mission” to try to pump water...

While Tokyo Electric Power, the company that operates Fukushima Daiichi, was heavily criticized for its response to the disaster, Yoshida’s efforts to minimize the damage won praise. He did, however, admit that he should have sanctioned better tsunami walls at coastal nuclear plants during his time as head of nuclear facilities.

Yoshida continued to direct recovery operations for 8 months after the disaster struck, but went on sick leave in December 2011 after being diagnosed with esophageal cancer. He is survived by his wife, Yoko, and three sons.