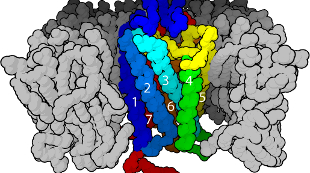 Wikimedia Commons, ValerynsThe 2012 Nobel Prize for Chemistry goes to Robert J. Lefkowitz of Duke University and Brian K. Kobilka of Stanford University for their work in discovering the inner workings of G-protein-coupled receptors, which enable cells to sense their environment and communicate with each other, the Nobel Assembly at Karolinska Institute announced this morning (October 10) from Stockholm.

Lefkowitz started to trace cell receptors in 1968. Using radioactivity, he managed to unveil several receptors, including one for adrenalin, the β-adrenergic receptor. His team then extracted the receptor from the cell membrane and forged an initial understanding of how it works.

This family is now known as G-protein-coupled receptors, and the studies by Lefkowitz and Kobilka have been crucial to understanding how they function. The insights have been critical to drug discovery, among other areas of research, as around half of all drugs currently available work by targeting these receptors.