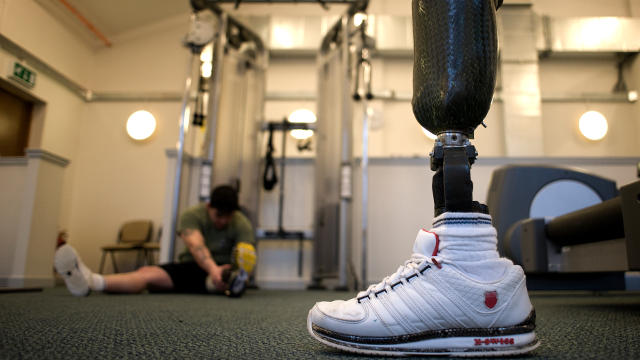 WIKIMEDIA, SGT IAN FORSYTH RLCProsthetic limbs are rejected by amputees’ bodies at a rate of about 20 percent. Researchers at MIT are seeking to reduce that number, using an amputation procedure that encourages increased feedback between muscles, tendons, and the nervous system so that an artificial limb might stimulate them in a more natural way—giving patients a better sense of proprioception, or where their limb is in space.

The key to the surgical technique, demonstrated in rats so far, is to emulate the normal agonist-antagonist pairing of muscles (think biceps and triceps) at the amputation site so that the muscles and nerves surrounding a prosthetic can sense and transmit proprioceptive information about the artificial limb and how much force is being applied to it. The researchers published their work today (May 31) in Science Robotics.

“We’re talking about a dramatic improvement in patient care,” Hugh Herr, an MIT...

See “Proprioception: The Sense Within”

Herr, himself a double-amputee, and his team operated on seven rats, cutting through muscles and nerves in their hind legs. The researchers then grafted on paired muscles, wiring them up to severed nerves. After healing for four months, the rats’ new muscles were contracting and relaxing in tandem, as in naturally paired muscles, and sending electrical signals that reflected the amplitude of the artificial stimulation Herr and his colleagues applied.

“In the past, the limb was amputated and cremated, and all those great tissues were thrown away,” Herr told Popular Science. “Even in my case—both my legs are amputated below the knee, and my amputations were done 30-some years ago in a really silly way, in a conventional way—in principle we can do a revision on my limbs and get muscles from another part of my body and create these pairs.”

Herr added that he and his team plan to translate this surgical technique into humans and that he will serve as the first study subject.