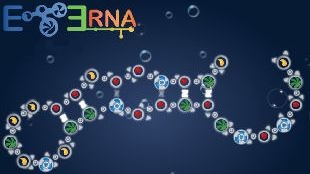 CARNEGIE MELLON UNIVERSITY, STANFORD UNIVERSITY A team of gamers using eteRNA, an online RNA-building tool, published its initial findings in the Journal of Molecular Biology yesterday (February 16), offering new insights into the relationship between an RNA’s sequence and its structure. Although eteRNA data have been described in previous studies, this is the first time that players of the game—many who are not professional scientists—have led the publication of a scientific article on the subject.

“It’s important to capture these insights and make them both public and credible via publication in peer-reviewed journals,” study coauthor Rhiju Das of Stanford University, who helped create the game, said in a statement.

Das and colleagues launched EteRNA in January 2011 as a way of crowdsourcing human input for a problem that computers were struggling to solve: namely, how to design an RNA sequence that would fold into a particular shape. Players...

Now, the gamers’ paper presents a set of rules, compiled principally by three experienced eteRNA users, rating the difficulty of creating a hypothetical RNA shape based on specific features. When the Stanford researchers tested these rules against standard algorithms developed to supply the sequences producing specific RNA shapes, they found that players’ predictions of difficulty strongly correlated with the time algorithms took to solve the puzzles.

For example, ”the players discovered . . . and the algorithms independently confirmed, that the more symmetrical a requested structure is, the harder it will be to design,” Das said in the statement.

Craig Stark, a neurobiologist at the University of California, Irvine, who was not involved in the study, told Reuters that the project illustrated the potential for human insight and problem-solving skills to help crack RNA-folding, and challenges like it. “People are smart and creative and if we can harness this power, we have a tremendous tool at our disposal,” he said.