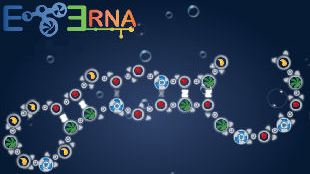 CARNEGIE MELLON UNIVERSITY AND STANFORD UNIVERSITYPredicting RNA folding can be complex, even with the best in silico models. To help address this challenge, researchers created a game called EteRNA, which after being played by more than 37,000 citizen scientists online, helped generate a new algorithm that predicts RNA folding more accurately than previous algorithms. Details of the game and its findings were published yesterday (January 27) in PNAS.

“It's pretty amazing stuff,” Erik Winfree of the California Institute of Technology, who did not participate in the research, told ScienceNOW.

Every week, EteRNA participants designed sequences based on a target structure in the browser-based gaming interface. The top eight possibilities were chosen by the players’ vote and then synthesized and analyzed in the lab. Based on the reported folding outcomes of the chosen sequences, users developed a collection of design rules. To test the rules, some...

“Many areas of biological research have reached a level of complexity that the mental bandwidth of the individual researcher has become a bottleneck,” Shawn Douglas of the University of California, San Francisco, who was not involved in the work, told ScienceNOW. And although the EteRNA strategy may not work for scientific questions that are not “amenable to game-ification,” the current findings demonstrate that “there are tens of thousands of people around the world with surplus mental bandwidth and the desire to participate in scientific problem solving,” Douglas added.