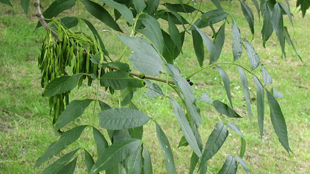 Botanists in the UK have teamed up with game development company Team Cooper to design a social media game that uses real genetic data from the common ash tree, Fraxinus excelsior, and from the Chalara fraxinea fungus to find out what makes some trees less susceptible to it.

“The more people who play it, the more accurate the results will be for us and the quicker we can generate the information needed to help our woodlands recover from the current epidemic,” Dan MacLean, the lead botanist behind the game, called Fraxinus, said in a statement.

Chalara has wiped out between 60 percent to 90 percent of ash trees in Denmark and threatens many of the UK’s 80 million ash trees, some of which are more than 1,000 years old. Scientists think that some ash trees...

Fraxinus, which launched last Tuesday (August 13), presents players with multiple rows of colored leaves, where each color represents one of four DNA nucleotides and each row represents the genetic information from a different ash tree sample. Players are challenged to compare chunks of genetic code between the various ash samples, including around 100 Chalara-resistant trees from Denmark, as a means to search for genes that could be encode resistance. Players will also match genetic patterns from the Chalara fungus to learn more about how it spreads.

“The game itself is really helping with building our picture of what the genome is of ash,” Joan Webber, principal pathologist with the UK agency Forest Research and game advisor, told BBC News. Taking a crowdsourcing approach, she added, “We can get a fast start on evolution rather than leaving these trees out there finding a way to fight the pathogen over decades or even centuries.”