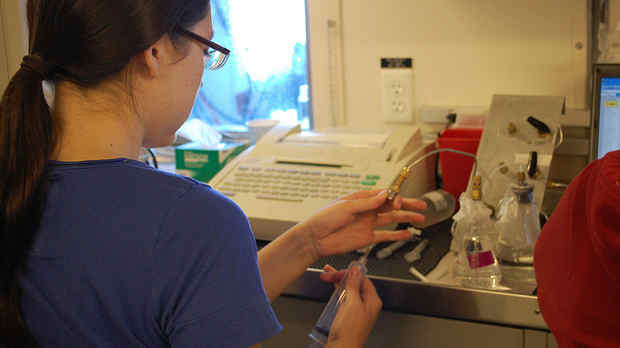 FLICKR, NOAAFor more than 50 years, researchers have used gas chromatography-mass spectrometry (GC-MS) to identify unknown compounds within biological samples. But according to new work from Gary Siuzdak of the Scripps Research Institute in La Jolla, California, and his colleagues, the method’s heating stage, used to volatilize and separate sample components, changes or destroys many of the compounds analyzed. Siuzdak’s team published its results this month (October 4) in Analytical Chemistry, questioning whether GC-MS is picking up the desired compounds of a sample or simply thermal degradation products.

“We found that even relatively low temperatures used in GC-MS can have a detrimental effect on small-molecule analysis,” Siuzdak told Chemical & Engineering News (C&EN). Molecular transformation from sample heating “has been a fundamental yet unrecognized problem with GC-MS technology since its inception,” he added. “I remember asking someone about it many years ago during the question period after his talk,...

Siuzdak and his colleagues tested the effects of heating by analyzing known small molecules and human plasma metabolites with liquid chromatography-MS (LC-MS), which does not involve a heating stage, and comparing those results to identical samples that had been heated to 60 °C, 100 °C, or 250 °C—temperatures commonly used in standard GC-MS procedures. They found that the higher the temperature, the greater the proportion of compounds that were destroyed or modified: 5 percent, 15 percent, and 30 percent for each of the three conditions, respectively.

This phenomenon could help explain why such analyses generally identify only 20 percent of cellular metabolites, Stephen Barnes, director of the Targeted Metabolomics & Proteomics Laboratory at the University of Alabama, told C&EN. But the problem likely isn’t limited to GC-MS, he added. “Those doing LC-MS analyses need to think hard about this too,” he said, as those methods sometimes use heated solvents.

But not everyone is concerned. Metabolomics expert Oliver Fiehn of the University of California, Davis, told C&EN that when analytical chemists “develop, validate, and implement an analytical method for GC-MS, they carefully control for important method parameters,” such as the temperature to which compounds are heated. Siuzdak’s group didn’t implement such controls, Fiehn  added. In some experiments, the researchers “used underivatized metabolites and heated them intensely,” he said. “That is called cooking—like in a kitchen. . . . I am unclear why a scientific journal would publish work that is such clear nonsense.”

Another difference between traditional GC-MS and Siuzdak’s experiments is that “the published study heated dry samples, whereas GC heats samples in a liquid solution for a few seconds during injection and then in the gas phase,” Warwick Dunn of the University of Birmingham, U.K., told C&EN. “Heat transfer in a solid can be expected to be higher and could therefore provide a higher level of degradation than in the gas phase. . . .  [F]urther validation of the degradation of many metabolites is required before we should worry about the terabytes of data already collected.”