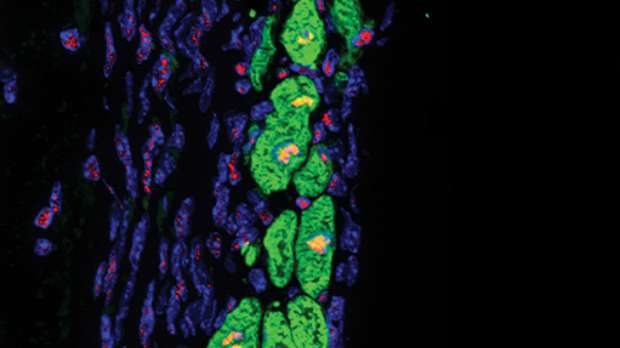 New heart muscle cells (green with yellow nuclei) grow in the infarcted region of a mouse heart treated by the patch loaded with FSTL1.UC SAN DIEGO/SANFORD BURNHAM PREBYS MEDICAL DISCOVERY INSTITUTETo find a way to repair the damage that happens to cardiac tissue after a heart attack, researchers have developed a patch that delivers a regenerative molecule to the organ’s surface. A team led by Stanford University’s Pilar Ruiz-Lozano reported in Nature yesterday (September 16) that the implant helps restore cardiac function to mice and pigs who have had a heart attack.

“Many were so sick prior to getting the patch that they would have been candidates for heart transplantation,” Ruiz-Lozano told BBC News. “The hope is that a similar procedure could eventually be used in human heart attack patients who suffer severe heart damage.”

The scientists conducted a screen for molecules that could spur the production...

Within a month, the researchers observed cardiomyocyte division among animals treated with FSTL1, along with improved cardiac function, less scarring, and better survival.

“It could act like a cell nursery,” Ruiz-Lozano said in a press release. “It’s a hospitable environment. Over time, it gets remodeled and becomes vascularized as new muscle cells come in.”

“This study is an inspiring example of how a developmentally conserved regulatory pathway can be mobilized to induce heart regeneration,” Gordana Vunjak-Novakovic of Columbia University wrote in an accompanying commentary. “Although more work needs to be done to determine the benefits of such an approach in large-animal models (the authors conducted a preliminary study in pigs, but it involved only six animals divided into three groups), the proposed reconstitution of epicar­dial Fstl1 could lead to entirely new modalities for treating heart infarction.”

Ruiz-Lozano has a startup company working to develop the patch for clinical trials in humans.