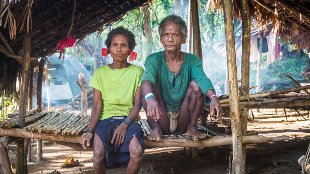 The natural human preference to live with or near kin is particularly strong among hunter-gatherers, but gender equality may allow these communities to include large percentages of genetically unrelated residents, according to a study published last week (May 15) in Science.

Researchers at University College London (UCL) developed mathematical models to test how gender equality might influence the makeup of hunter-gatherer groups. In one simulation, the researchers gave men and women equal say in who they lived with and in the second, only men could decide. The researchers then determined the frequencies of couples in which both individuals were genetically unrelated. Over 100 simulations of a group size set to 20 individuals, the average frequency of unrelated pairs was 12 percent among the egalitarian groups and only 0.6 percent among the groups where only men made membership decisions.

To find out if these estimates...

“When only men have influence over who they are living with, the core of any community is a dense network of closely related men with the spouses on the periphery,” study coauthor Mark Dyble of UCL told The Guardian. Aside from increasing genetic diversity, the researchers proposed that unrelated couples can promote cooperation within and across hunter-gatherer groups. Such cooperation could, in turn, increase social networks and the circulation of resources and information.

Gender equality in group composition-related decision-making is likely not the only driver of unrelated pairings in hunter-gatherer groups, however. “The paper is a very interesting and useful exercise,” Kim Hill, an anthropologist at Arizona State University, Tempe, told Science. “But I would be reluctant to accept their model as the [only] answer.”