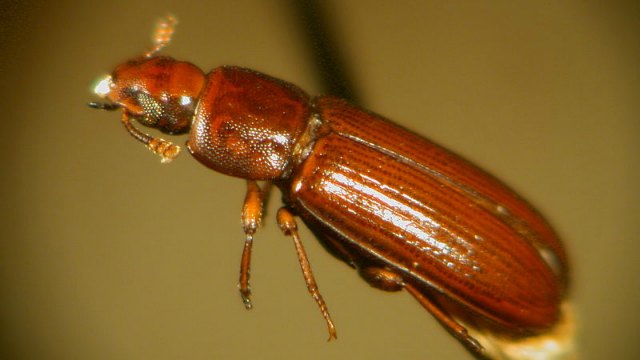 WIKIMEDIA, ERIC DAY, VIRGINIA TECH, BLACKSBURG, VAGene drive is a technology that could squelch insect-borne diseases, by forcing deleterious traits engineered into the animals’ DNA to spread throughout populations by selective inheritance. Researchers have shown gene drive is possible in the lab, but there appears to be a catch: reporting in Science Advances last week (May 19), scientists found genetic variations in the sites targeted for CRISPR-based editing can render the intervention useless.

And these variants aren’t researchers’ only challenge. Wade and his colleagues wrote in their paper that “mild inbreeding, which is a characteristic of many disease-vectoring arthropods,” had the same effect as these alleles that...

The researchers set out to test how genetic variation might affect the efficacy of gene drive in the flour beetle, Tribolium castaneum. Using CRISPR, they targeted several genes in the beetle genome with the intent of harming the animal’s fitness. But rather than observing the gene drive spread throughout the population, CRISPR-resistant variants became more frequent and caused the gene drive to disappear.

According to the release, “Wade’s statistical analysis found that a genetic variation rate as low as 1 percent—combined with a rate of inbreeding typical to mosquitos in the wild—was enough to eliminate any CRISPR-based population-control methods in six generations.”

Wade and his colleagues urge gene drive developers to assess genetic variation and mating practices in the wild before using the technology.