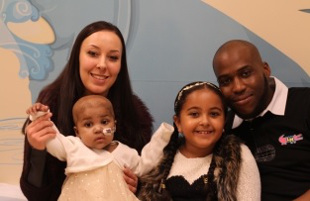 Layla Richards and familyGREAT ORMOND STREET HOSPITALIn June a group of London clinicians obtained special permission to treat Layla Richards, a one-year-old infant diagnosed with leukemia, with an experimental gene editing therapy that had not yet seen clinical trials. The therapy eliminated the diseased cells, and so far Layla remains cancer-free. The scientists will present their case study at the American Society of Hematology’s 2015 meeting during a poster session (December 5).

The treatment represents the first time that gene editing therapy has been used to such a life-saving degree. Layla was diagnosed with acute lymphoblastic leukemia at three months old and didn’t respond to traditional chemotherapy regimens or a bone marrow transplant. “We didn’t want to accept palliative care, and so we asked the doctors to try anything for our daughter, even if it hadn’t been tried before,” Layla’s mother Lisa Foley said in a press release...

Current therapies in development genetically engineer a patient’s own T cells to target the cancer. But in some cases—like Layla’s—the cancer doesn’t leave enough T cells undamaged to engineer. “She was too small and too sick,” Qasim told New Scientist.

Instead, Qasim and colleagues at UCL, London’s Great Ormond Street Hospital (GOSH), and biotechnology company Cellectis offered Layla’s family a treatment that engineered a donor’s T cells to target a patient’s cancer. Using artificial restriction enzymes called TALENs, they disabled a gene that would cause the donor cells to attack the patient’s body and removed a second gene to protect the donated T cells from antibodies that would otherwise destroy them. The result is called UCART19 cells.

Layla responded to a single 1 mL dose of the UCART19 cells and her cancer seemingly vanished. “Her leukemia was so aggressive that such a response is almost a miracle,” Paul Veys, the director of bone marrow transplant at GOSH who led the team treating Layla, said in the press release. But, he cautioned The Wall Street Journal, “We’ll start talking about a cure only a year or two from now.”