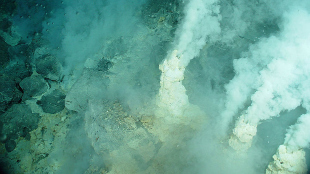 WIKIMIEDIA, NOAAHorizontal gene transfer—the passing of DNA from one organism to another—is a prevalent among bacteria, and has even occurred between distantly related organisms, such as animals and bacteria. In a study published in eLife last week (November 25), researchers demonstrated for the first time that an antibacterial gene family has made the rounds across the three domains of life, from bacteria to archaea and eukaryotes.

“It is the first discovery of a functional antibacterial gene in Archaea,” Vanderbilt University’s Seth Bordenstein, who directed the study, said in a press release.

The results open up a new avenue for searching for antibiotics—in archaea. The gene family Bordenstein’s team studied is an enzyme that can deconstruct the bacterial wall.

Study coauthor Anna-Louise Reysenbach, a Portland State University microbiologist, said in the release that she had often wondered how these archaea, which live near hydrothermal vents, compete for resources...

It’s also possible that the gene transfer helped the archaea gain nutrients not by competition, but by directly feeding upon the bacteria. “Maybe it is not so much carving out a competitor-free niche as helping itself to a bite of bacterium for lunch,” Bill Martin from Heinrich-Heine University in Dusseldorf told National Geographic’s Not Exactly Rocket Science.