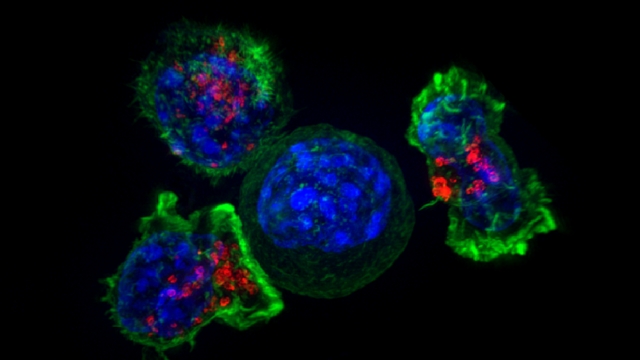 An immune checkpoint blocker successfully treated a variety of tumors in patients with gene mutations in a DNA repair pathway, according to a study published last week (June 8) in Science. Johns Hopkins University researchers and their colleagues demonstrated that the drug pembrolizumab eliminated, shrank, or stopped the growth of tumors in 66 out of 86 patients with 12 different types of cancer.

These patients all had advanced tumors that exhibited genetic mutations in mismatch repair (MMR)—a pathway responsible for scoping out and fixing a variety of DNA mistakes—and had already undergone at least one round of cancer treatment. As the New York Times reports, a 60-year-old patient with a rare and aggressive bile duct tumor was one of the participants who experienced...

Pembrolizumab, branded as Keytruda, is an antibody that targets PD-1—a protein that keeps the immune system’s T cells in check, inhibiting them from attacking other cells. When PD-1 is blocked by the drug in patients with MMR-deficient tumors, the researchers demonstrated that patients’ immune systems can generate a response against their cancer.

Specifically, the patients who responded to treatment exhibited an increase in T cells specific to so-called neoantigens. MMR cancers are thought to carry a high number of these neoantigens, or aberrant proteins that result from gene mutations.

“These data support the hypothesis that the large proportion of mutant neoantigens in MMR-deficient cancers make them sensitive to immune checkpoint blockade, regardless of the cancers’ tissue of origin,” the authors write in their article. “[M]any cancer patients contain in their immune system the capacity to react selectively to their tumors.”

The Food and Drug Administration has already approved pembrolizumab for patients with certain advanced cancers who exhibit these types of mutations, the New York Times reports.

Seventy-four percent of patients experienced side-effects, mainly consisting of endocrine problems such as hypothyroidism, although the researchers report that these side-effects were “low-grade” and “manageable.”

According to a news release, researchers are still continuing with the trial.