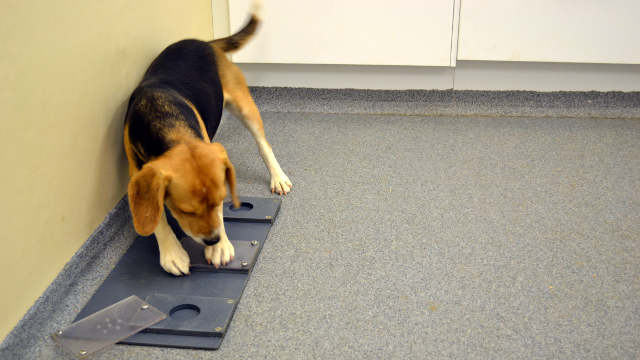 Beagle attempting to solve an unsolvable taskMIA PERSSONVariants of four (out of five) genes in a segment of the dog genome linked to social behavior have also been associated with neurological and behavioral disorders in people, such as autism, schizophrenia, and aggression, according to a study of more than 430 lab-raised, untrained beagles, which was published yesterday (September 29) in Scientific Reports.

“[Our aim] is to try to understand the genetic underpinnings of domestication: What is it that has helped to turn the wolf, which is really not interested in humans to start off with, into this extremely sociable creature which is the dog?” animal behaviorist Per Jensen of Linköping University in Sweden told The Guardian. “We think we have at least found some of the genetic background of this process.”

After a few attempts on their own, many of the beagles looked to the woman observer in the room—a stranger to the dogs—for help. Some animals glanced at her, then back at the stuck lid; others went up to and even made physical contact with her.

Scanning the dogs’ DNA for differences between the 190 dogs that spent the most and least time close to, and in physical contact with the woman after failing to access the third treat, the researchers identified genetic markers on chromosome 26 associated with the social interactions. “What we figure has been going on here is that there are genetic variants that tend to make dogs more sociable and these variants have been selected during domestication,” Jensen told Science News.

One genetic marker fell within the SEZ6L gene, which was recently linked to autism spectrum disorder in people, and two fell within the ARVCF gene, which is associated with schizophrenia. Another gene in the region, COMT, has been linked to aggression in children with attention deficit hyperactivity disorder.

The results suggest that dogs may one day serve “as a novel model system for human social disorders,” the authors wrote in their paper.

Of course, these genes do not explain each dog’s personality, Jensen told The Guardian. “We also know that the genetic contribution to this variation is only about 30 percent, so 70 percent of the variation has to do with things like experience.”

Eleanor Raffan, a canine genetics researcher at the University of Cambridge, agreed: “Even if one or more of the five genes identified do exert an effect, it’s likely only a small part of the story,” she told The Guardian.