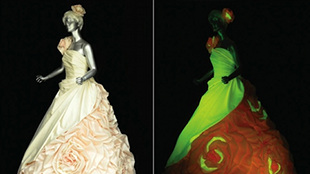 The researchers inserted glowing proteins, borrowed from corals and jellyfish, into the silkworm genome near the gene for the silk protein fibroin. They then raised more than 20,000 transgenic silkworms, which expressed fibroin proteins with the fluorescent molecules attached, and collected their colorful cocoons, according to a paper published earlier this month (June 12) in Advanced Functional Materials.

Ordinarily, during the silk-making process cocoons are heated to 100°C to soften them, but the researchers found that the fluorescent proteins degraded at high temperatures and developed alternate methods for processing the silk. The silk fabric they ultimately produced had most of the same physical properties of ordinary silk, although it is...

Silkworms have previously been genetically modified to produce human collagen proteins, which could be useful for medical applications, and to spin hybrid silkworm and spider silk that is stronger than ordinary silk.