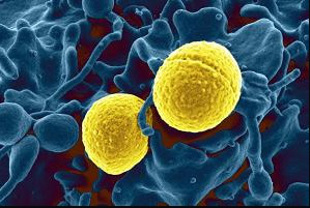 Staphylococcus aureus bacteria (gold), which are commonly found on the skin.FLICKR, NIAID

A study published in Genome Biology this week (September 15) offers more evidence that genetics help determine the composition of microbial communities across the human body.

The body’s microbial communities have been extensively cataloged, and intriguing compositional differences found. To investigate the relationships between these organisms and their host bodies, Ran Blekhman from the University of Minnesota and his colleagues used data from the Human Microbiome Project (HMP), a National Institutes of Health program that aimed to map the microbial makeup of healthy individuals using genome sequencing.

Genotype data for the host humans was not officially collected as such during the HMP, but Blekhman’s team was able to extract genetic information from “human contamination” collections. All told, the team gathered genomic data from 93 individuals who had participated in the HMP. The researchers then tested...

Modeling and principal components analyses revealed that genetic variation correlated with the overall structure of a person’s microbiome in 10 of the 15 sampled body sites. The team also discovered that between individuals, genetic similarity is correlated with microbiome similarity. Most of the relevant genetic variation in the study was associated with immunity-specific pathways, suggesting that the host human’s immune system helps control its microbial residents.