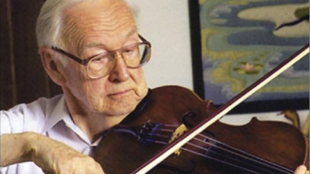 James Crow, an influential population geneticist at the University of Wisconsin-Madison, died of congestive heart failure last Wednesday at the age of 95, the New York Times reported. A leader in the field for more than 50 years, Crow helped shape public policy on major genetics issues such as atomic radiation damage and the use of DNA in the courtroom. He was active in the scientific community right up until his death, working on a new paper in his campus office just two weeks ago, the university reported.

“He was the real organizer of population genetics in the United States,” Will Provine, a historian of biology at Cornell University, told the Times. Crow’s 1970 landmark textbook, "An Introduction to Population Genetics Theory," co-authored with Motoo Kimura, laid much of the groundwork for the mathematical basis of population genetics theory.

Crow was also an active public servant and an accomplished musician who played the viola in the Madison Symphony Orchestra from 1949-1994. He is survived by a son, two daughters, six grandchildren and two great-grandchildren.