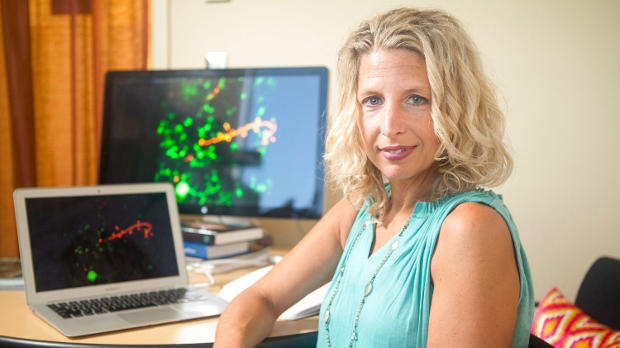 Beth Stevens, Boston Children's Hospital neuroscientist, is one of this year's MacArthur Fellows.IMAGE: JOHN D. & CATHERINE T. MACARTHUR FOUNDATIONTwo dozen of the brightest minds on Earth this week recently received recent phone calls from the MacArthur Foundation that may just change their lives—or at least their next five years. These folks are the 2015 MacArthur Fellows, and they’ll be getting $625,000 over the next half-decade (a no-strings-attached stipend colloquially known as “genius grants”) to pursue their work in a range of fields, from poetry and puppetry to inorganic chemistry and neuroscience. “These 24 delightfully diverse MacArthur Fellows are shedding light and making progress on critical issues, pushing the boundaries of their fields, and improving our world in imaginative, unexpected ways,” MacArthur Foundation President Julia Stasch said in a statement. “Their work, their commitment, and their creativity inspire us all.”

Among this year’s crop of MacArthur...

“We try to reach people who have shown evidence of exceptional creativity but show the potential for more in the future,” Cecilia Conrad, the foundation’s managing director, told The New York Times.

“As a scientist, I tend to be drawn to areas where there’s very little known,” said Stevens, who studies how microglial cells influence brain development and neurodevelopmental disorders, in a MacArthur Foundation video. “And so work that you do can make a big impact.”

Studer, whose research involves the large-scale generation of dopaminergic neurons for transplantation, echoed Stevens’ sentiment about shedding light on mysterious corners of science. “What really gets me super exited in science is not just making the discovery, but trying to apply it,” he said in his own MacArthur video. “This award might really not only motivate me, but hopefully all my colleagues and the whole field to really bring this technology to the forefront and really make it happen.”