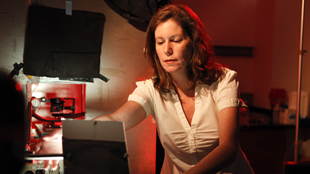 MacArthur Fellow Sheila Nirenberg works in her lab at Weill Cornell Medical College in New York.MACARTHUR FOUNDATIONThe MacArthur Foundation this week announced its newest crop of MacArthur Fellows, 24 in total, spanning an array of disciplines from jazz music to astrophysics. Recipients of these so-called “genius” grants will receive $625,000 over five years, with no restrictions as to how they spend the money. Six of the 2013 grantees are working to answer biological or biomedical questions.

One winner, neuroscientist Sheila Nirenberg, is a professor at Weill Cornell Medical College in New York. She studies the code that retinal neurons use to communicate visual information to the brain. Her work cracking this code has allowed her to develop computerized prostheses that could help people with degenerative retinal disorders. “It’s so unbelievably thrilling,” Nirenberg said of winning the fellowship in a video released by the MacArthur Foundation. “It’s one of...

Fellowship awardee and research psychologist Angela Duckworth’s work to understand human behavior has led to the development of evidence-based learning interventions for children. Susan Murphy, another winner and a professor at the University of Michigan, uses statistics to understand how people with depression, schizophrenia, or cocaine abuse problems can be helped by better data collection. MacArthur Fellow Phil Baran, an organic chemist at The Scripps Research Institute in La Jolla, California, has developed new ways to synthesize natural products with potential pharmaceutical applications, including an antiangiogenic compound that could be useful as a cancer treatment. Kevin Boyce, another California-based grantee, is a paleobotanist at Stanford University. Boyce uses fossils to understand how plant evolution has shaped weather patterns in our ecosystem.

Jeffrey Brenner is a physician who has used his self-professed “passion for data” to improve healthcare for the most underserved residents of Camden, N.J. “It’s really exciting to get a vote of confidence,” he said of becoming a fellow in a MacArthur Foundation video. Brenner wants to improve healthcare quality while reducing costs citywide. “This fellowship puts a huge amount of momentum behind that effort,” he added.