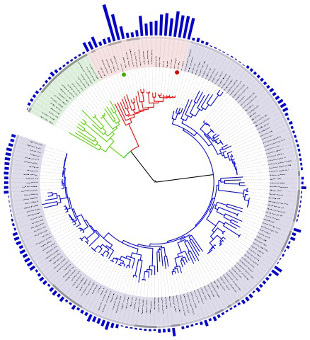 WIKIMEDIA, GRINGERCodes based on quantitative assessments of genomic similarity could complement current nomenclature for all sequenced organisms on Earth, researchers at Virginia Tech proposed in PLOS One last week (February 21). Boris Vinatzer and his colleagues suggested that such a system could help describe within-species variation, which is increasingly being realized as more genomes are sequenced. The researchers also suggested that this system could be standardized in a way traditional Linnaean taxonomy cannot. “The limitation of the Linnaeus system is the absence of a method to name the sequenced organisms with precision,” Vinatzer said in a statement.

In their paper, the researchers demonstrated how such a genome similarity-based system is largely align with current taxonomic groups in bacteria, viruses, plants, and animals.

Virginia Tech said it is submitting a patent describing the naming approach, and that Vinatzer and coauthor Lenwood Heath have founded a company that intends to...

“A patent on a universal naming system is an odd idea,” wrote user Smallpaul. Username185 added: “Seems like a power play to prevent people from creating similar naming conventions based on genome.”