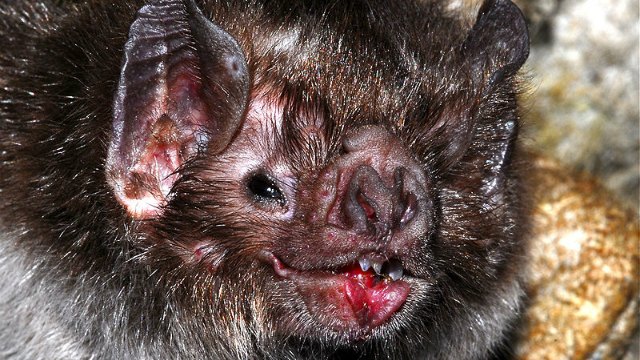 WIKIMEDIA, DESMODUSDespite the risks of sanguivory—such as a dependence on poor nutrients and the ingestion of pathogens galore—vampire bats’ blood-only diet suits them just fine, thanks to an unusual genome and a specialized microbiome.

Reporting today (February 19) in Nature Ecology & Evolution, researchers describe twice the transposon content in the genome of the common vampire bat, Desmodus rotundus, compared to other bats’ genomes. These genetic elements are located in regions responsible for activities relevant to surviving on blood, such as viral defense and lipid metabolism.

Additionally, the scientists found alterations in genes for a bitter taste receptor and an infrared sensor, plus an enrichment of genes that respond to starvation. The genome of D. rotundus also possesses fewer endogenous retroviral elements, perhaps due to an expansion of antiretroviral genes, compared to bat species that don’t live off blood.

“It is clear that despite the number of...

Although the microbiome composition of vampire bats was more similar to that of carnivorous bats than to that of fruit bats, it was nevertheless “strikingly different” on a functional level, the authors write. For instance, vampire bats’ microbiomes contained pathways for producing vitamins, interfering with coagulation, and storing iron.

“The data suggests that there is a close evolutionary relationship between the gut microbiome and the genome of the vampire bat for adaptation to sanguivory,” Zepeda Mendoza tells the BBC.