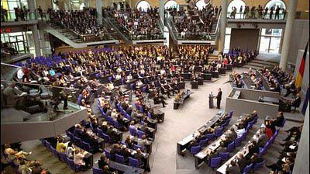 The Bundestag, the German Parliament, in BerlinWIKIMEDIA, WHITEHOUSE.GOVThe University of Düsseldorf this week (February 5) withdrew the doctoral degree of Germany’s science and education minister, Annette Schavan, after a committee found she had plagiarized parts of her 1980 philosophical thesis.

An anonymous blogger first posted plagiarism accusations last May, prompting Schavan to ask the university to investigate. A report from the professor looking into the case, leaked to the press in October, found that around 60 pages of the 351-page dissertation contained passages slightly reworded from other sources without any citation. Earlier this week, a 15-member university council voted to invalidate the degree.

Schavan will challenge the university’s decision. She has previously admitted mistakes and carelessness, but denies any deliberate wrongdoing or deception. But if her appeal fails, Schavan will become the second government minister under the direction of Angela Merkel, Germany’s first female Chancellor, to lose her...