The inner mucus filter of a giant larvacean, a member of the genus Bathochordaeus© 2017 MBARIPlastic pollution has emerged as a real threat to Earth’s ecosystems, especially in the ocean. But microscopic bits of plastic that swirl near the surface may have a route to deeper layers. Giant larvaceans, members of the marine zooplankton that swim in the upper layers of ocean waters worldwide, may be capable of ingesting microplastic pollution and transporting it to deeper parts of the sea, according to researchers at the Monterey Bay Aquarium Research Institute (MBARI).

“We’re really at the tip of the iceberg in understanding really where these plastics are winding up,” study coauthor and MBARI researcher Kakani Katija tells The Verge.

Katija and her colleagues performed experiments in which they fed plastic particles smaller than sand grains to the giant larvacean Bathochordaeus stygius, a frequent visitor of Monterey Bay. B....

When giant larvaceans excrete microplastics or when they shed their mucus feeding nets, which also trapped the particles, both sink. The authors suspect the waste may be consumed by deep sea-dwelling organisms, providing a route for the pollutants to enter new ecosystems.

Although the researchers admit that the larvaceans typically swim at depths lower than those at which microplastics float, their findings map a potential route for transfer of the pollutants to new depths. “We are finding pieces of microplastic in deep sea animals and in sea floor sediments,” Anela Choy, Katija’s MBARI colleague and a coauthor on the paper, tells Wired. “We often think of it as just a surface pollution problem, but there are many mechanisms that can transport the [plastic] pollution down from the surface.” 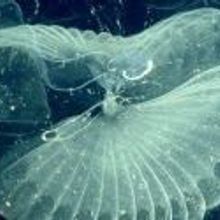