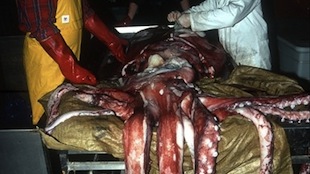 The deep sea-dwelling giant squid Arciteuthis has turned up all over the world. But, whether in Florida or Japan, the invertebrates are all members of the same species, according to a paper published today (March 20) in Proceedings of the Royal Society B.  Analyses of 43 squid from diverse locations showed that their mitochondrial DNA varies surprisingly little.

This lack of genetic diversity is puzzling. While giant squid are elusive, the researchers wrote, their populations are believed to be relatively large and geographically spread out—qualities usually associated with high diversity. The first live giant squid was spotted in 2004, and the Discovery Channel published the first video of the species earlier this year. But partially digested fragments of the cephalopods are found frequently in the stomachs of a key predator, the sperm whale, and scientists believe that they wouldn’t be able to support such common...

“It is difficult to reconcile this low genetic diversity with the reasonable assumption that Architeuthis are globally distributed with relatively large population size,” the researchers wrote in the paper.

The team collected 43 squid from diverse locations, including New Zealand, South Africa, and the Falkland Islands. They were found floating dead in the water, washed up on beaches, or as accidental by-catch from deep-sea fishermen.

The researchers said that there were many possible explanations for their findings. The squid’s mitochondria may have evolved unusually slowly, or they could have recently expanded from a small population to a large, widely distributed one. But the explanation they considered most likely was that the squid were unusually well traveled.

This could mean that the squid, which can grow as big as 18 meters in length, migrate through the oceans as adults. But past studies had shown that they are generally restricted to small hunting ranges. Instead, the researchers said, the squid may float long distances on sea currents in a juvenile, larva-like form, keeping geographically separate squid populations from forming.