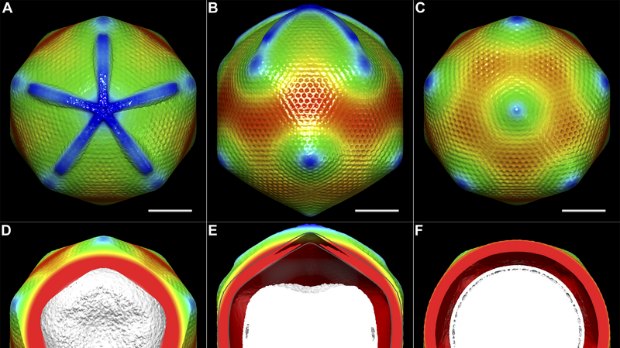 WIKMEDIA, PLOS BIOL, 7:e1000092, 2009A giant virus known as mimivirus possesses an immune program similar to CRISPR, a defense system evolved by bacteria and archaea and now adapted by scientists for genome editing, researchers reported in Nature this week (February 29). Like CRISPR, the viral version (dubbed MIMIVIRE) includes a stretch of host genome containing repeated sequences matching a pathogen’s along with genes that can destroy the invader’s genome.

The precise method of immunity still has to be deciphered, Francisco Mójica, a microbiologist at the University of Alicante in Spain, told Nature News. “It will certainly be of great interest to identify the mechanism involved in MIMIVIRE immunity,” he said, adding that he suspects it works differently from CRISPR.

Didier Raoult, a microbiologist at Aix-Marseille University in France, and colleagues had previously discovered that a virophage, called Zamilon, could infect mimivirus—but only two lineages (B...

Supposing the resistance might have roots in a CRISPR-like mechanism, Raoult’s team sequenced genomes from the three giant-virus lineages, and found a 28-nucleotide stretch of DNA in lineage A identical to a sequence in Zamilon. Part of this stretch was repeated another four times. “We therefore suggest that the four 15-nucleotide-long repeated sequences that were exclusively found in all APMV-A genomes are linked to resistance and immunity against Zamilon virophages,” the authors wrote in their report.

Scanning the genome around these repeats, the researchers also discovered genes appearing to code for enzymes that can unwind and slice DNA.

Raoult and colleagues noted a few differences between MIMIVIRE and CRISPR, including a lack of spacers in the genomic repeats. “The giant viruses most likely enclose a whole lot of new biology, some of which, including the MIMIVIRE, could find novel application,” Luciano Marraffini, a bacteriologist at the Rockefeller University, told Nature News. “Maybe in genome editing, maybe in other fields.”