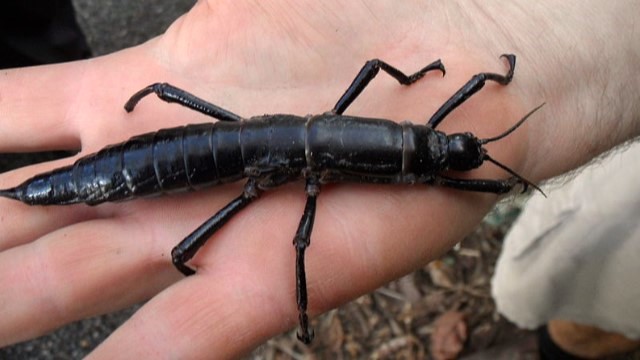 WIKIMEDIA, GRANITETHIGHSA population of Lord Howe Island stick insects (Dryococelus australis), also known as tree lobsters, has been identified on a volcanic spire in the Tasman Sea, according to a report published last week (October 5) in Current Biology. Officially declared extinct in 1986, the 15-centimeter long insects were thought to have been wiped out shortly after the introduction of black rats onto Lord Howe Island from an infested ship in 1918.

Although there had been a few sightings of similar-looking insects in the region since then, this is the first time the animals have been conclusively identified since their disappearance almost 100 years ago. “The stick insect [story] illustrates the fragility of island ecosystems, and in particular, how vulnerable they are to manmade changes like invasive species,” Alexander Mikheyev, an evolutionary biologist at the Okinawa Institute of Science and Technology, says in a statement....

In 2001, a survey of Ball’s Pyramid, the remains of a large volcano about 20 kilometers away from Lord Howe Island, turned up a handful of live insects that appeared similar to the supposedly extinct tree lobsters. But it took a genomic analysis of the animals to confirm that they were indeed members of the same species—revealing less than 1 percent divergence with historical museum specimens.

The researchers are now considering how the insects might be reintroduced to Lord Howe Island following a rodent eradication program being planned for the region from 2018. “In this case, it seems like we’re lucky and we have not lost this species forever, although by all rights we should have,” Mikheyev says in the statement. “We get another chance—but very often we do not.”