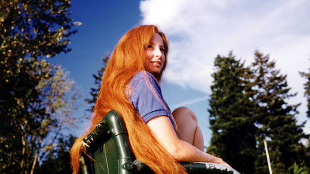 Wikimedia, Bill KuffreyFair-skinned redheads are at a higher risk of sunburn, which at first blush seems like it might explain their higher risk of developing skin cancer and premature skin aging. But according to a study published this week (October 31) in Nature, that’s not the whole story. Instead, the version of melanin that gives gingers their unique coloring also plays an independent role in the development of melanoma.

“There is something about the redhead genetic background that is behaving in a carcinogenic fashion, independent of UV,” David Fisher, a cancer biologist at Massachusetts General Hospital in Boston, who led the study, told Nature. “It means that shielding from UV would not be enough.”

Non-redheads carry a darker form of melanin, called eumelanin, while those with lighter complexion and red hair carry a pigment known as pheomelanin, which is less protective against the sun’s damaging UV rays....

However, the finding, while surprising and interesting, is probably not a common cause of skin cancer in people, Eugene Healy, a clinical dermatologist at the University of Southampton, UK, told Nature. Indeed, most human melanomas develop on sun-exposed areas of skin, Healy said. “You almost never see melanoma, for example, on the buttocks.”

“One of the most important messages from this is to avoid an assumption that this takes UV off the hook,” Fisher agreed, noting that one way UV radiation might promote skin cancer is by worsening pheomelanin’s carcinogenic ability.