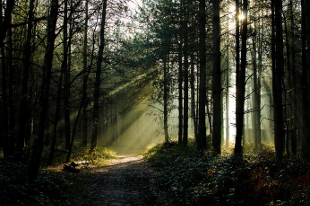 Researchers have used on-the-ground measurements and satellite imagery from around the world to approximate the global number of trees. The resulting estimate, published yesterday (September 2) in Nature, is about 3 trillion—or 422 trees for every person, with a human population of 7.2 billion.

An international team linked more than 400,000 ground measurements with satellite imagery, generating tree-number estimates across wide areas and on every continent except Antarctica. “All of the information that went into our models was generated from people standing on the ground counting numbers of trees in a given area. And so we could relate this information to what the satellites are telling us,” study coauthor Thomas Crowther told NPR’s Goats and Soda.

The data show that the highest numbers of trees are found in the tropical regions, but the densest areas are the boreal forests just below the Arctic Circle. The...

“It’s quite rigorous. It’s using all of the best available data that we have at a global scale, so I think it’s a nice advance,” Matthew Hansen, a geographer at the University of Maryland who maps land cover but was not involved in the research, told NPR.

This estimate only reveals so much, however: “It’s an important and useful piece of work but we should remember that the number of trees is not necessarily the best metric for measuring the health of an ecosystem or its importance. A plantation of many of the same trees isn’t the same as a patch of Amazon rainforest,” Simon Lewis, a geographer at the University College London and University of Leeds, who also was not involved in the work, told The Guardian.