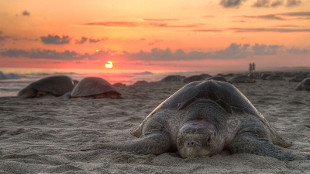 Sea turtles are among the wildlife species whose populations have fallen dramatically during the past 40 years, according to the WWF report.WIKIMEDIA, CLAUDIO GIOVENZANA

Populations of vertebrate animals decreased by an average of 52 percent from 1970 to 2010, as measured by the Living Planet Index. The index, an analysis of 10,000 populations of more than 3,000 species, is part of the biennial “Living Planet Report” released yesterday (September 30) by the World Wildlife Fund (WWF).

WWF scientists examined worldwide populations of mammals, birds, reptiles, and fish, analyzing trends in marine, freshwater, and terrestrial environments. They found that freshwater populations experienced the greatest declines—an average of 76 percent. The report cites habitat degradation, along with hunting and fishing, as the major drivers of global wildlife declines, and notes that climate change is an increasing threat. The most dramatic drops were in tropical and low-income regions, tied to...

The report also highlights severe losses, such as the drop-off in tropical marine turtles and the restriction of forest elephants in West Africa to just 7 percent of their former range (circa 1900).

Success stories, on the other hand, include the rebound of mountain gorillas in Rwanda and changes in Australian sugar farming that have decreased pollution pressure on the Great Barrier Reef.

While the 2012 Living Planet Index estimated a 28 percent decline in vertebrate populations between 1970 and 2008, this year’s index includes more data from outside North America and Europe and uses statistical methods that add weight to dominant populations within each region of the world.

Still, combining disparate datasets to calculate this type of global statistic can be problematic. “The quality of the data is highly variable from one population to another, and some population trends are likely to be biased,” Stephen Buckland, codirector of the U.K.’s National Centre for Statistical Ecology, told BBC News. “So is there a decline? Certainly. Are animal numbers around 52 percent lower than 40 years ago? Probably not.”